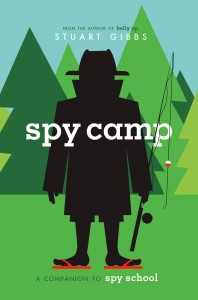 When you’re learning to be a spy, there’s no such thing as summer vacation.

Ben Ripley is back! And now that summer’s finally here, he’s ready to have some fun and relax. Except that’s not going to happen, because a spy-in-training’s work is never done. Ben and fellow students are shipped off to Spy Camp, a top-secret wilderness survival training facility. When SPYDER, an enemy spy organization resurfaces, Ben will have to put all his newfound skills to the test. Luckily, Ben has Erica Hale – his beautiful and talented fellow student – along for the adventure. Can Ben stay alive, impress the girl and once again thwart SPYDER’s nefarious plans?

“Gibbs’ screenwriter roots are evident in the explosive action sequences. The quirky cast of characters, witty dialogue and high-stakes action make for an entertaining read that will likely satisfy adrenaline junkies.” – Kirkus Reviews

“Spies, counterspies and moles speed the brisk action… The characters are both comic and convincing (no mean feat), and the story boasts some nifty surprises. Fans of the genre will be pleased and will look forward to the next volume in this series.”  – Booklist