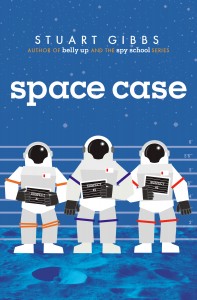 Prepare for an adventure that’s out of this world.

For twelve-year-old Dash Gibson, being one of the first humans to live on a moon colony isn’t all it’s cracked up to be. But his life gets a jolt when a top lunar scientist mysteriously turns up dead. Dash suspects foul play, but no one believes him, so Dash takes the case himself – but he better watch out. If he doesn’t crack the case quickly, he too might end up dead on the moon.

“The lunar setting puts a fresh spin on the locked-door mystery genre, and Gibbs plants plenty of credible suspects among the eccentric cast… Fans of the Spy School series will welcome this debut entry in Gibbs’s latest run.” – Bulletin of the Center for Children’s Books

“Gibbs stocks the cast with multiple suspects and red herrings… [T]his is notable for its unusual setting and features a narrator who displays a realistic mix of wonder at his location and annoyance at having to deal with the Spartan life on another planet.” – Booklist