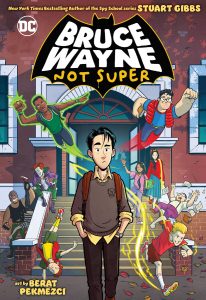 I got to write a Batman Graphic Novel!  And the art is incredible!

Bruce Wayne: Not Super has art by Berat Pekmezci of The Flash comics that follows a 13-year-old Bruce Wayne as he attends an exclusive prep school for the gifted. But this school is for the super-gifted. Bruce doesn’t stand a chance of winning a race against the future Flash, or a swim meet against the future Aquaman, studying botany against Poison Ivy, taking tests against Brainiac and Lex Luthor, and he always gets picked last for dodgeball.

It’s hard enough being in middle school, but it’s even worse when you’re the only kid at your school who doesn’t have super-powers. Bruce does have a goal though: he wants to make a difference in the world. But how can he do that when he doesn’t have any powers? While the Future-Supers are currently content to simply use their gifts to glide through school and court popularity, Bruce struggles to figure out if he has any gifts at all — and if so, how to use them. His challenge comes when he discovers fellow student Jack Napier and his hired bully Bane shaking down lesser-powered students for money, including that hapless kid Dick Grayson. Someone must stand up to them and somehow, it’s going to be Bruce! Bruce Wayne: Not Super represents an alternate origin story for Batman and a number of other iconic DC characters, imagining them all as school age kids and with Bruce as the misfit. Filled with a lot of humor, this is a light-hearted take on a well-known and beloved character.