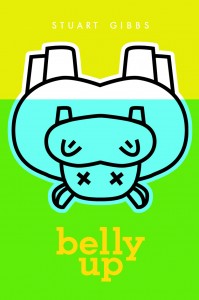 Henry the Hippo, the beloved mascot of FunJungle, America’s hottest new tourist attraction, is dead. Twelve-year-old Teddy Fitzroy suspects foul play, but when no one believes him, he decides to investigate himself. To his surprise, he discovers that plenty of people wanted Henry gone — and the list of suspects keeps growing. As Teddy searches through the clues and asks too many questions, it becomes clear that he too might end up belly up.

“First-novelist Gibbs offers no shortage of suspects in his fast-paced story, which deftly mixes humor and suspense. Cleverly plotted…this book is an auspicious debut that will leave readers clamoring for more.” – Booklist

“Great fun… In his authorial debut, screenwriter Gibbs combines details of the inner workings of zoos with some over-the-top action for an entertaining read.” – Kirkus Reviews

“Gibbs handles issues of animal welfare in a fair way without being preachy, and his motley cast of characters holds its own with quirky personalities and memorable details.” – School Library Journal

Next in the FunJungle series: Poached