The last time I wrote a blog post about how to write and on line reviews was nearly nine years ago.  Back then, I was really explaining to visitors to my site how to post a review on Goodreads or Amazon.

I realize that, these days, most people (or at least most people who read my books) know how to do this.  But it has come to my attention that there are several things many people do in writing their reviews that annoy other people.  So I figured I would write a new post, trying to correct some of these problems.

There is not a single person on earth who appreciates having a review spoil a surprise in a book that they want to read.  NO ONE!  And writing ‘Warning: Spoilers Ahead’ does not mitigate the damage.

It is very very easy to not put a spoiler in your review.  Simply don’t share anything from the book that you were surprised to find out.  Of course, this not only applies to writing reviews on websites, but also comments on this webpage — or any other.

And, for the record, I am not only talking to amateur reviewers here.  There are plenty of professional — or at least seasoned — reviewers who spoil things in their reviews all the time.  Don’t do it.  Or random people will hate you.

Just about every site only gives you five options for reviews: 1, 2, 3, 4 or 5 stars.  Admittedly,  having only five options lacks nuance.  That said, it is staggering to see how many times someone will give a four star review and say, ‘I really think this should be 4.5 stars.’  If you ever feel like this, round up!  That’s just basic math, people.  And do you know what it costs you to give something 5 stars instead of 4?  NOTHING.

If you don’t like the subject matter that a book veers into, that doesn’t mean it deserves a one star review.   Because that isn’t really a review of the book at all; it’s your own personal issues coming through.

4. BE NICE TO OTHERS WHO WILL READ THE REVIEW

Recently, I have had issues with people purposefully posting spoilers — or even fake spoilers — simply to upset people.  That’s not cool.

That said, if you really didn’t like a book of mine, you should feel free to write a review saying that you didn’t like it.  Personally, I find well-written reviews explaining what a person’s problems with my book were to be very helpful.  (Although I certainly like reading 5-star reviews more.)

You’re probably thinking to yourself ‘Why is Stuart even writing this?  What kind of knucklehead would post a bad review as a joke?’

This one, for starters: 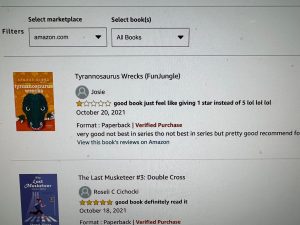 And that’s not the only time i have found a review like this.  I can’t believe I have to say this, but: Don’t do this!  Most people don’t read every single review a book has.  They just look at the cumulative ratings.  A once star review doesn’t get counted as a joke.  It gets counted as the worst possible review.

Also… This isn’t even remotely funny.  Would you think it was funny if a teacher gave you an F on a test and then said, “I was just joking!”  I am guessing that you would not.  So please, folks, if you’re going to make a joke on-line, don’t do it at someone else’s expense — and also, try to be funny.

Okay.  I’ve said my piece.  Thanks for reading this.