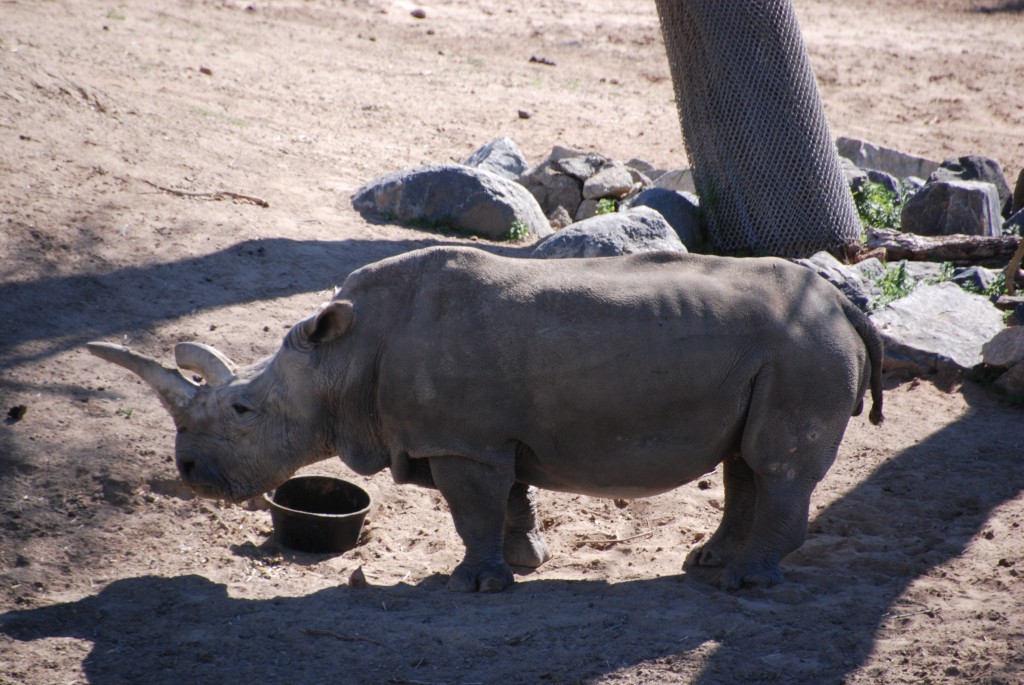 Shortly after I wrote this, Nola passed away.  So now,  instead of four Northern White Rhinos left on earth… there are three.

Nola lives at the San Diego Safari Park.  By all accounts, she as as sweet and good-natured as any animal can be; she’s like a two ton labrador retriever.  And she is one of only four northern white rhinos left on earth.  That’s right: THERE ARE ONLY FOUR OF THESE RHINOS LEFT ON THE ENTIRE PLANET.

There are none left in the wild.  The other three are in a zoo in Europe.  And they’re all too old to breed, which means there is really nothing we can do to save them.  This beautiful creature is going to die out in your lifetime.

If you’ve been paying attention to this blog, you’ll know this isn’t the first time I’ve called attention to this.  However, it seems worth bringing up again.  I’ve been traveling around the USA over the past few weeks, talking about the serious problem of rhino poaching (as it’s at the heart of my newest book, Big Game).  And the school kids I’ve talked to are very, very upset to learn about Nola and the rest of her species.

They’re also very upset to learn about the fact that other rhino species are being killed off at an unsustainable rate, meaning they might go extinct in our lifetimes as well.

They’re upset to learn that on average, THREE RHINOS ARE KILLED ILLEGALLY EVERY DAY.

And they’re also upset to hear that elephants are in serious trouble as well.  Right now, on average, ONE OF THESE BEAUTIFUL CREATURES IS BEING KILLED ILLEGALLY EVERY 14 MINUTES.  THAT’S 96 ELEPHANTS A DAY.

Tanzania estimates it has lost 60% of its elephant population over the last five years.

If you want to get involved, there are many great organizations working to help stop the slaughter.  Please check out at least one of these to find out what you (and your family, and your friends, and your school) can do:

And check out the Save The World tab at the top of this page to learn about other organizations protecting wildlife and their habitats around the world.

Let’s try to make sure that other species don’t suffer the same fate that Nola will.

2 thoughts on “This is Nola. She’s a northern white rhino. And her species is about to go extinct.”