But of course, you knew that.  You probably read the front page article in the New York Times.  Or saw the special Collector’s Editions of People and Entertainment Weekly.  Or watched the five hours of simulcast live coverage on MTV, VH1, Disney XD, Nickelodeon, C-SPAN, E! and PBS.   So I don’t have to go on about it.

Thanks to my pal, astronaut Garrett Reisman, I and my family had VIP seats to the launch of space shuttle Atlantis in Florida last Friday.  What an incredible thing.  An amazing, unbelievable event.

There’s only two more shuttle launches after this and then… that’s it.  End of an era.  So if you are in any way able to get to Florida to see one, GO!  (Plus, I’d advise everyone to watch NASA TV this week to see Garrett’s spacewalks.)

Here’s a picture I took from my seat (which was as close as you could get): 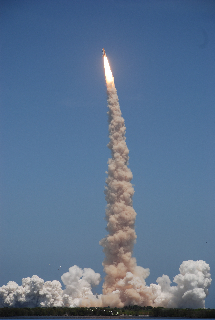 My book came out yesterday.

I would have written this yesterday, but I was on a plane back from Florida.  And, to my surprise, although the official launch date was yesterday, the book actually showed up in bookstores over the weekend.  This was a surprise to me.  And thus, the first time I ever saw my book in a store was in a random Barnes & Noble in suburban Orlando.

Now, seeing your own book on the shelves of a store… That was just as awesome as seeing a space shuttle launch to me.   A very nice employee named Cory walked me through my first impromptu in-store signing.  So if anyone happens to be near the Plaza Venezia Barnes & Noble on Sand Lake Road relatively close to DisneyWorld… you can acquire one of the first signed copies of Belly Up there!

While I’m at it, I’d like to thank Barnes & Noble for their exceptionally fine placement of my book – in tandem with Carl Hiaasen’s new YA novel, which is an honor, as Hiaasen has been one of my favorite authors since I was a teenager.  (Cory was very impressed by this; in Florida, Carl Hiaasen is publishing royalty.)

If you don’t have your copy of Belly Up yet, call your local bookstore to see if they have it.  If they do… go get it.  And it they don’t… ask them why not. 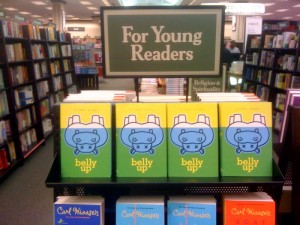