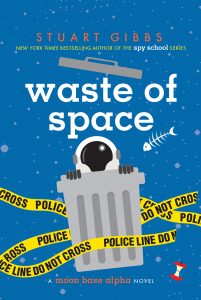 A lot of readers have written to me lately, having noticed that my publisher is referring to Waste of Space as the ‘third and final book’ in the MBA series on sites such as Amazon and Barnes & Noble.  Everyone wants to know if this is really true.

When I wrote Space Case, the first book in this series, I really wanted to handle the realities of space travel as realistically as possible.  I think I did a decent job of that, but it created a problem for me: It turns out, the moon is a very limiting place to set a series.

Let me explain:  For my Spy School books, I can really send my characters just about anywhere on earth I want.  And while FunJungle is theoretically tied to FunJungle itself, I can create whatever locations I want inside that park — and I am free to have my characters leave FunJungle as well.  But in the MBA series, the only location fit for human habitation is the moon base itself, which I made quite small — and my characters are not really free to range very far away from it.  Plus, even if they could leave MBA (which they do on occasion) the moon is not a place with much variation.  Yes, there are some hills and craters and lava tubes, but for the most part, the moon is pretty much the same wherever you go.  This — and the fact that humans have to wear space suits — is extremely limiting when I want to develop new action sequences.

Lots of people have made suggestions to me about how to open up the series, but they really won’t work.  To address them:

Why not move the action to Moon Base Beta?

Because I have made it clear that MBB hasn’t even begun construction — and once that happens, it is supposed to take another ten years to build and that plan is probably optimistic, which means MBB won’t be up and running for another 10-15 years, at which point my lead characters will be college graduates.

Why not move the series to Mars or another planet?

Because I have made it clear that even getting to the moon is tremendously difficult (which is the truth).  Getting to other planets is going to be much more difficult, and it would be unlikely that we could have bases on them any time soon, which means that, yes, the terrain might change, but the limitations of having my humans confined to a small location are still there.

Why not move the series to the International Space Station?

Because the ISS is even smaller and more limited than MBA is.  Even by 2041, it won’t be that big — and that’s assuming that we haven’t defunded it and let it fall back to earth (which is a possibility).

So… does this mean that the series is completely dead?

Not necessarily.  I do have some ideas about how I might be able to keep it going, but for now, I would rather focus on my series that do not feel so limited.

Which brings me to my other big news.  Since MBA is ending (for now, at least), I am in the process of creating a new series.  However, my publisher has asked that I not reveal any details about it quite yet.  They will be coming, though.  I promise.  (So please don’t write asking for more details.  I will just tell you to read this post again.)

514 thoughts on “Yes, it’s true. Waste Of Space will be the end of the Moon Base Alpha series… for now.”